Happy New Year from Telluride, Colorado!   On New Year's Eve, I shot some photographs from Telluride's Mountain Village, where fireworks were on display.  You can see some of the ski runs of Telluride Ski Area.

There were a few light snow showers on New Year's Day.  Not much to add to the snow already on the ground, maybe an inch of fresh powder, but it was just enough to make want to go out and shoot some fresh snowfall pictures.   My first destination was to Lizard Head Pass, just southwest of Telluride at an elevation of over 10,000 feet.  It was extremely cold under a clear sky.  My car thermometer read -17 degrees!  Another photographer was already there trying to stay warm in his car before first light hit the peaks.  Soon, light began to reach the tops of Mount Wilson and the rock spire called Lizard Head (pictured below).   It was so cold that frost was developing on my tripod ball head.  I had to be careful about exhaling moisture onto my camera while taking pictures so that ice wouldn't form on my camera.   Due to the very cold air, I didn't stay here long... but did get a nice wintry shot of Lizard Head. 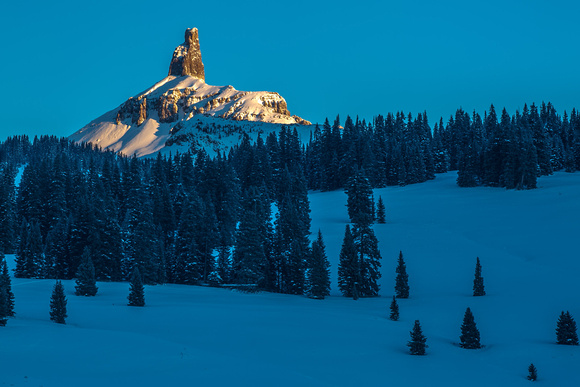 Warming up while driving, it was then on to Last Dollar Road just above the Telluride Airport.  This area features a mix of ranch land and homes.  I was on this road back in September while on a photo tour with Rick Louie.  He pointed out a nice scene of an old barn with 14,017 foot Wilson Peak in the background.  I had been on this road several times, but it is easy to miss this photogenic scene because it is nestled between two homes.  Wilson Peak is the mountain featured on the logo of Coors Beer. 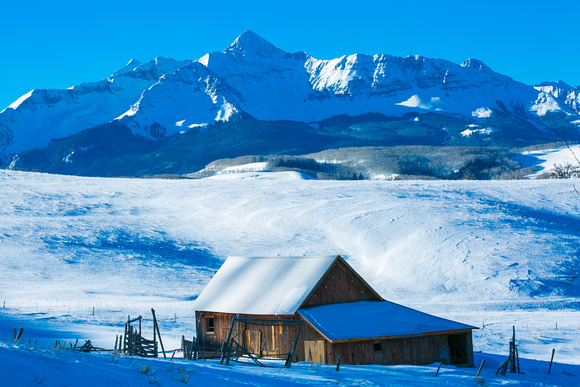