During the month of July, I spent quite a bit of time in the Colorado Rockies, including seeing some new territory in Central Colorado.   On the morning of July 4th, I took a hike into the Collegiate Peaks Wilderness near Leadville and Buena Vista up to Lake Ann.  The columbines were coming out for the summer. 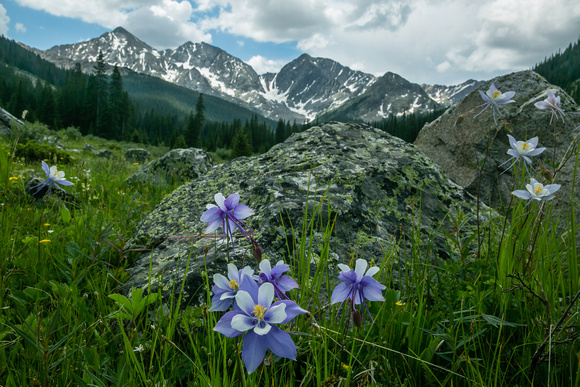 Hikes like this with a daypack was a good warmup for the hikes I was about to take with a backpack for a 2 night trip into the Mount Sneffels Wilderness near Ridgeway.   During the second weekend of July, I was guided by professional photographer David Kingham, who did a great job scouting out a scenic campsite spot between Lower Blue Lake and Middle Blue Lake.  The climb was tough carrying a 33 pound backpack, especially after climbing above the lower Lake of the three Blue Lakes.  However, it was worth the effort.  When the sun shines on the water, it really brings out the the turquoise colors caused by the rich minerals in this basin.  The colors of the water remind of some lakes that I have seen in Glacier National Park or in the Canadian Rockies around Banff and Lake Louise.

David picked a location where we could photograph either the Lower or Middle of the Blue Lakes with only a short walk for the sunrise and sunset of those 2 nights we were there.  This picture was taken just before sunset as we were looking down from the where the middle Blue Lake empties into this beautiful mountain stream. 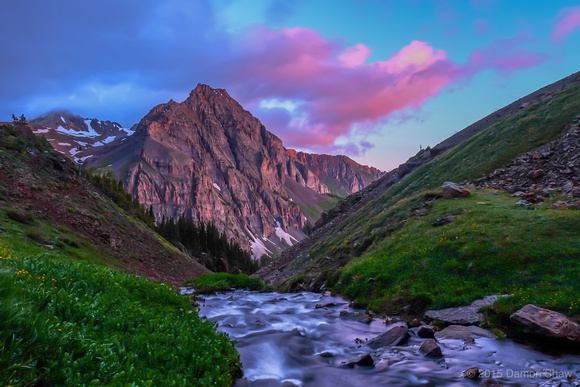 For a couple of days during the 3rd week of July, it was time to attend a workshop in Crested Butte, hosted by John Fielder.  John is not only great at promoting the beauty of Colorado, but is a talented photographer and quite possibly the most well known of the Colorado Landscape photographers.  I have admired his work for a number of years and it was great to meet him in person.   For a evening session, he would drive us up a 4 wheel drive road to a place locally known as "Paradise Divide", where there is a scenic pond at an elevation of 11,250 feet.   We were fortunate to be here on such a calm evening where the water was so still.   It made for great reflections in the water! 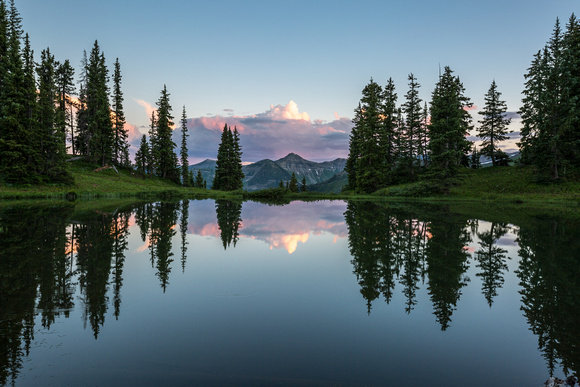 The following morning we would make the short drive just outside Crested Butte to Peanut Lake for a great sunrise!

After leaving the Crested Butte workshop, I would move on to the Aspen area and climb up to Electric Pass, at an elevation of over 13,000 feet. This is the 2nd highest hike I have taken.  It is amazing to see that a few rather large wildflowers can grow at this elevation.