I am starting out my 13 day trip of the Desert Southwest.  The first destination is to Las Vegas.  While Las Vegas is known for its urban fun along "The Strip", there is also some scenic beauty within an hour of the city.  I joined a guided jeep tour with Las Vegas based Pink Jeep Tours that offers 6 hour trips to Valley of Fires State Park.  The first stop was to the petroglyph site at Atlatl Rock.  An atlatl (rhymes with battle) is a hunting device used for launching a spear.  The ancient Indians used these weapons and they are depicted in the petroglyphs located at Atlatl Rock.  This area has outstanding petroglyphs that should not be missed.

Petroglyph ArtPetroglyphs at Valley of Fire State Park in Nevada

While there is plenty of ancient history at Valley of Fires State Park, my favorite area is the colorful drive along White Domes Road.  This scenic drive features spectacular eroded rocks of many colors.

At the end of this scenic drive, is a hiking trail with an up close look at the multi-colored rocks.  Many of the rocks contain yellow and orange, but you will also find some bands of other colors such as white, pink and red.

The midday light was someone flat on this tour under an overcast sky.  I can imagine these scenes can be even more dramatic when you are here just after sunrise or just before sunset.  Imagining this makes me want to return to this state park again.  Now it was time to had back to Las Vegas for some nighttime photography on Las Vegas Boulevard, better known as "The Strip".  From a pedestrian bridge at the corner of Las Vegas Boulevard and Harmon Avenue, looking north you can see The Cosmopolitan, The Bellagio, Caesars Palace and The Mirage. This image was a 5 second exposure that gives the blurry motion of the cars. 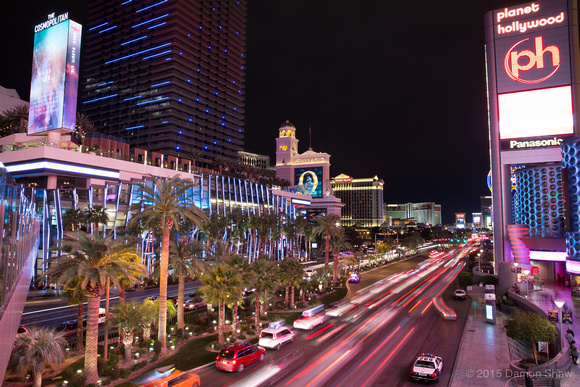