From Las Vegas, it was time to cover some new territory for me.  This is my first visit to Death Valley National Park. It is known for being the lowest, driest and hottest spot in North America.  Back on July 10th of 1913, Death Valley set a record for the hottest temperature ever recorded on Earth at 134 degrees!  That record still stands today.  Part of the reason why it is so hot is that it is actually below sea level.  Badwater Basin, inside Death Valley National Park, is the lowest place in North America.  At this spot, the elevation is as low as 282 below sea level.  Death Valley does not receive much rainfall and it is the driest location in North America.  However, what little water does fall can collect enough that sometimes there can be some standing water in this little spot after a recent rain.  You are more likely to see water here during the winter and spring. 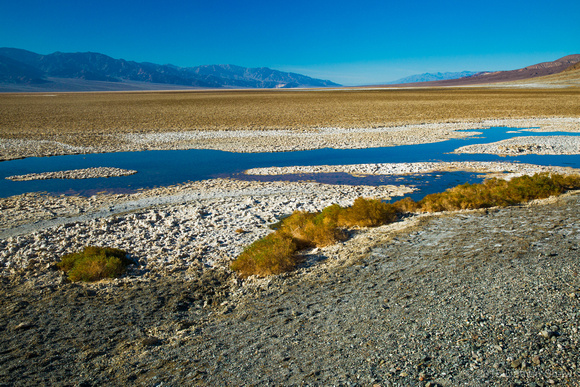 There is a lot of salt deposits here in the lowest elevations of Death Valley.  One of the large salt pans with a rough texture in Death Valley is aptly named The Devil's Golf Course.  Back in 1934, a National Park Service guide book stated that "Only the devil could play golf" on its surface.   Who would want to hit a golf ball out of this!?  Those aren't rocks. They are large clumps of dirt with a crust of salt crystals. As you can see there was not a cloud in the sky that afternoon in Death Valley.  It can often make for "boring" daytime pictures, particularly when the sun is high in the sky.  However, it can make for outstanding night photography to photograph a sky full of stars.  With this in mind, I thought visit the nearby ghost town of Rhyolite, Nevada on that clear moonless night. There are only a few remaining structures, but one building is a rather large ruin of what was a bank.  Hard to imagine that an estimated 4,000 people lived here around 1907 during the height of the gold rush in the nearby hills.  Rhyolite disappeared about as fast as it sprung up...most of its citizens left by 1920.