My favorite Arkansas photos this winter

Where I live in Northwest Arkansas, there hasn't been any more than a dusting of snow so far this winter.  Back in January, in order to see snow covering the ground, I have had to travel south into Central Arkansas.  On the morning of January 22nd, I drove to Pinnacle Mountain State Park, just outside of Little Rock.   Here about 6 inches of fresh snow covered the landscape. 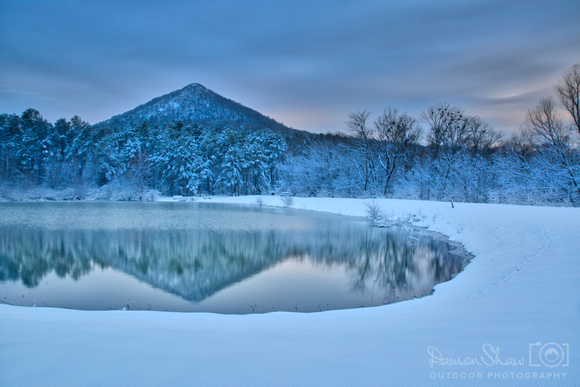 Winter is a great time to hunt for waterfalls.   One of the more unique and photogenic waterfalls that has been recently "discovered" in the Ozark National Forest is a little known place called Short Grotto Falls.  The waterfall is not big, but the grotto that has been created has made it an interesting place to visit. 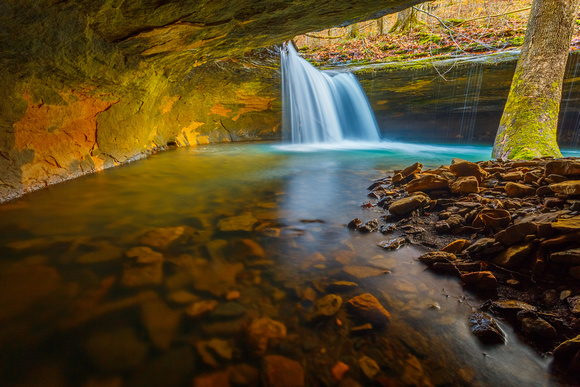 There is no trail to get to this place, but it is a relatively short and east bushwack to get there.  I suspect that this place will become more well known in the coming years, especially once it is published in the next upcoming edition of Tim Ernst's Waterfalls Of Arkansas.  Another little known place, also in Johnson County, is a rock formation called the Arkansas Sphinx.  Nobody seemed to know that this place even existed until loggers recently cut down the trees around it.  There is now a short, but steep, trail to get to this place.  The view is fantastic from this place, but the view won't be there forever.  Over the coming years, as the trees grow back, the view will diminish.  However, for now, it has become one my favorite subjects to shoot in the Ozarks of Arkansas.

On the morning of February 24, a heavy wet snow fell in the highest elevations of Arkansas.  The most impressive snow totals fell over 2,000 feet above sea level, where about 5 to 9 inches of snow accumulated.  I drove from Fayetteville (where snow did not accumulate), but it was a different world about 30 miles east and less than a thousand feet higher.  Knowing ahead of time, that is was going to be an elevation dependent snow event, I opted to drive to one of the icons of Arkansas, Hawksbill Crag.  That morning, it was not an easy place to reach, even by car.   On Highway 16 in far southeast Madison County, just before the turnoff to Cave Mountain Road, it was a winter wonderland...about 6 inches of fresh wet snow clinging to all the trees.  It caused one tree fall across the road, and I was blocked from going any further!  I had to wait for an electric company crew to clear out the tree with their chainsaws.  Once on Cave Mountain Road, I was the first person to drive on the snow covered dirt.  I was stuck in the snow a couple of times and decided to walk the rest of the way to the trailhead.  The trailhead is located about 2,200 feet and the entire landscape was covered in snow. However, as the trail drops down to the crag at about 1,900 feet, there was a noticeable difference in the amount of snow that fell and it was already melting pretty fast.  in this picture, you can see the difference in snow between the top and bottom of the mountains.  This type of snowfall was the closest thing you will see to seeing snow capped mountains in Arkansas! 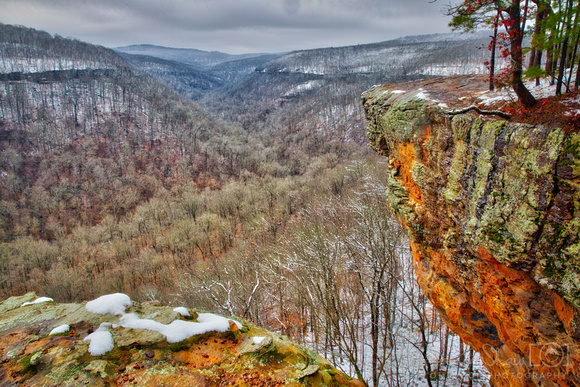