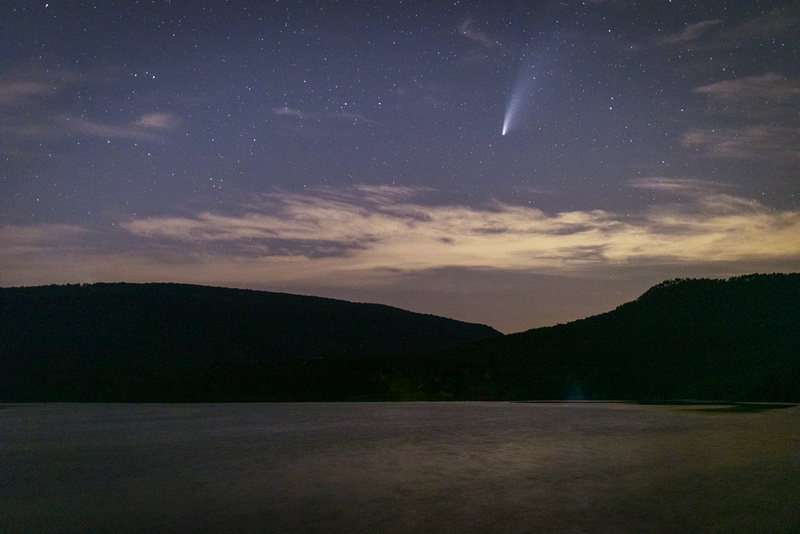 On Monday night, I decided to photograph Comet NEOWISE. The comet was first discovered on March 28 and spotted by NASA's Near-Earth Object Wide-field Infrared Survey Explorer; that's how the comet earned the name “NEOWISE". It is the 3rd comet that I recall seeing in my lifetime. Growing up, I remember Halley's Comet back in 1986 and Comet Hale-Bopp in 1997. To the naked eye, those comets seemed brighter and more visible than this one. Even after getting away from city lights, Comet NEOWISE was only barely visible to my naked eye. However, it is one of the first comets of the digital photography era and these more faint comets show up much better in today's high ISO digital cameras. This image was a 8 second exposure at ISO 3200.

After doing some research on where to find the comet, I wanted to find a location where I can could easily incorporate the landscape with the comet...not just point my camera at only the sky.  This involved determining a relatively dark place away from towns with an wide open view to the northwest. I concluded with Horseshoe Lake northwest of Clarksville in the Ozark National Forest. The foreground of the lake and the Boston Mountains complimented the comet. About 40 miles away (as the crow flies) northwest of here is the city of Fayetteville.  With my camera facing northwest, it appears that the city lights from the main cities of Northwest Arkansas illuminated the cirrus clouds beneath the comet.

You can see the comet for a little while longer below the Big Dipper in the northwest sky after sunset. It is best seen with binoculars. However, after July 23, it will get a little dimmer each day as the comet moves away from Earth.

MarryKelly(non-registered)
An Australian assignment writing service will offer a guarantee that the work is plagiarism-free. The assignment will go through in-house editing to eliminate any possibility of plagiarism. It will also double-check references and guarantee prompt delivery.
westerncapecollege.com(non-registered)
The result I got from westerncapecollege.com was unexpected. I had no idea that they would give such an amazing performance. No cons at all!
trustworthy essay writing services(non-registered)
I would like to give an applouse to the creator of trustworthy essay writing services. Literally I was able to make my task done with just in time. There is nothing to dislike!
No comments posted.
Loading...
Subscribe
RSS
Recent Posts
An architectural journey from Santa Fe to Taos The Garden Island of Kauai Merry Christmas and Happy New Year! More from the Colorado Rockies The Flat Tops Wilderness of Colorado The Blue Ridge Mountains of North Carolina Arctic Air Invades Arkansas Snow On Top Of The Ozarks Waterfalls and Rainforests of the Pacific Northwest 2021 Calendar Images
Keywords
Ozarks Arkansas snow Creek landscapes Ozark National Forest Arkansas photography Arkansas waterfalls winter Hawksbill Crag
Archive
January February March April May June July August September October November December
© Damon Shaw
Powered by ZENFOLIO User Agreement
Cancel
Continue