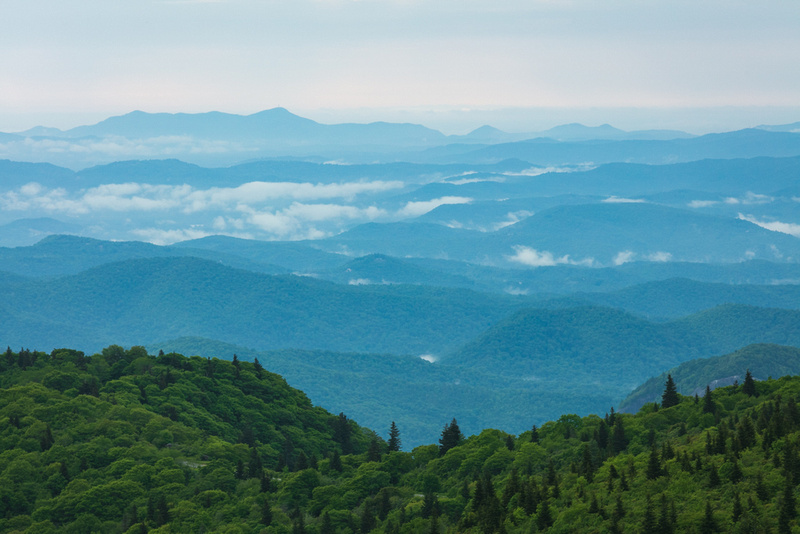 Earlier this month, my wife and I vacationed to the Asheville area of the Blue Ridge Mountains in North Carolina. Although photography wasn't the primary goal of the trip, I still managed to take some nice pictures on our drives and shorter hikes in the area.

Of course, a trip to Asheville would not be complete without a drive on the Blue Ridge Parkway.  The picture below was taken at 5,600 feet above sea level, close to some of the highest elevations in the eastern United States.  In this picture, you can see the change in green hues between the highest elevations where the trees had not fully leafed out yet and the lower elevations where the trees had already fully leafed out. 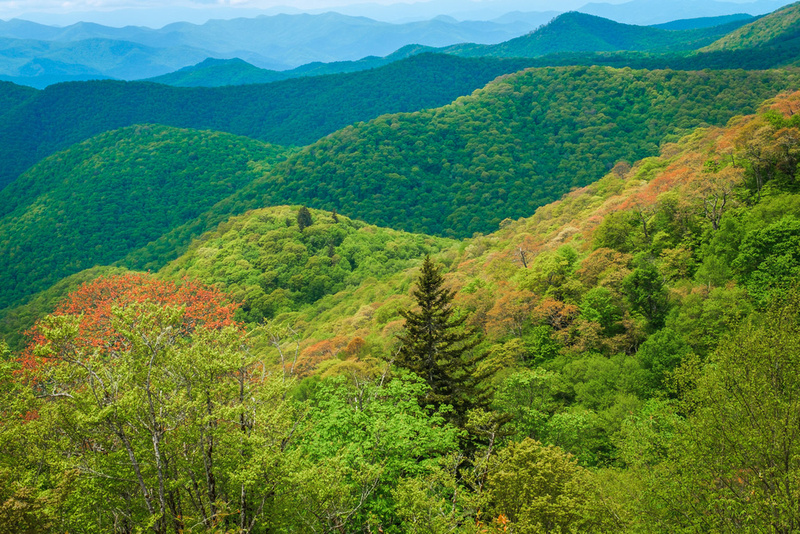 There were a couple of mornings where I was greeted with fog in the valleys. You may have noticed that the fog is more likely to have a blue color to the landscape, which leads to the topic of how did the Smoky Mountains and the Blue Ridge Mountains get there name? The Cherokee referred to the area as “Schconage” (Sha-Kon-O-Hey), which means “land of the blue smoke.” Early white settlers took inspiration from the Cherokee when they named the Great Smoky Mountains and the Blue Ridge Mountains of western North Carolina. The "smoke" is actually fog that comes from the area’s vegetation.

While the Smoky Mountains are not the only place you can find blue smoke, they do have ideal conditions for creating this picturesque fog. The trees containing turpentine in East Tennessee and West North Carolina have high concentrations of vapor molecules called VOC's (volatile organic compounds) that scatter blue light. We all know that plants take in carbon dioxide and give off oxygen. What we hear less about is how plants also have this exhale process in volatile organic compounds. VOC's may sound scary, but when they are released from plants, they are completely natural. Have you ever enjoyed the piney smell that comes from an evergreen tree? That scent comes from the tree giving off VOCs as it breathes. The Smokies also benefit from abundant rainfall, plenty of sunlight, and high levels of humidity. Taken all together, these factors produce a breathtaking fog that is worthy of the name “land of the blue smoke.” 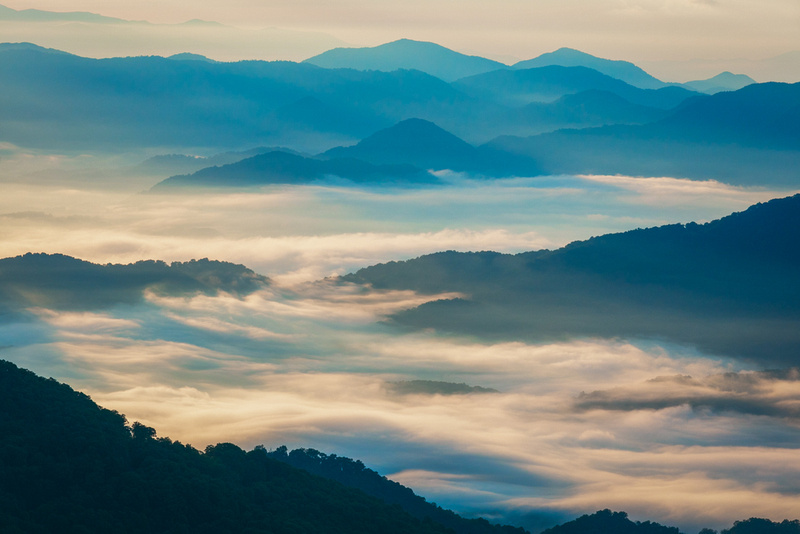 The Rhododendrons were also in bloom in the higher elevations and there are numerous waterfalls in the region.  Below are Skinny Dip Falls and Looking Glass Falls, both southwest of Asheville. 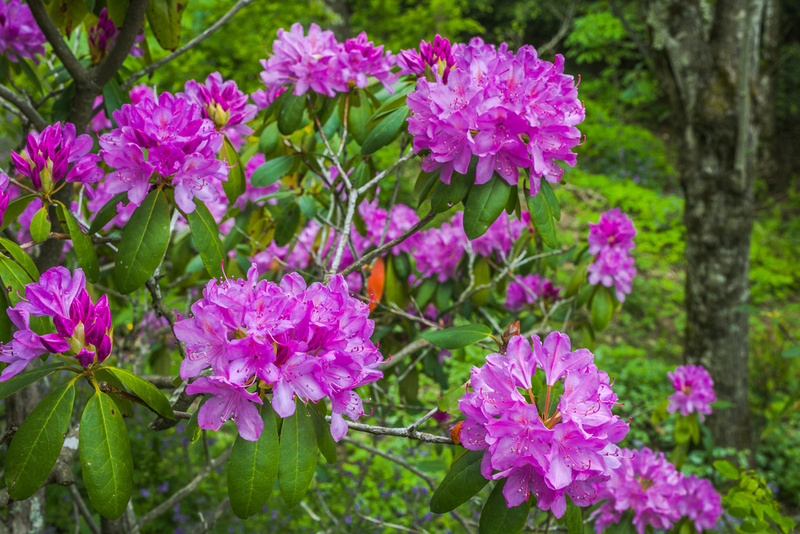 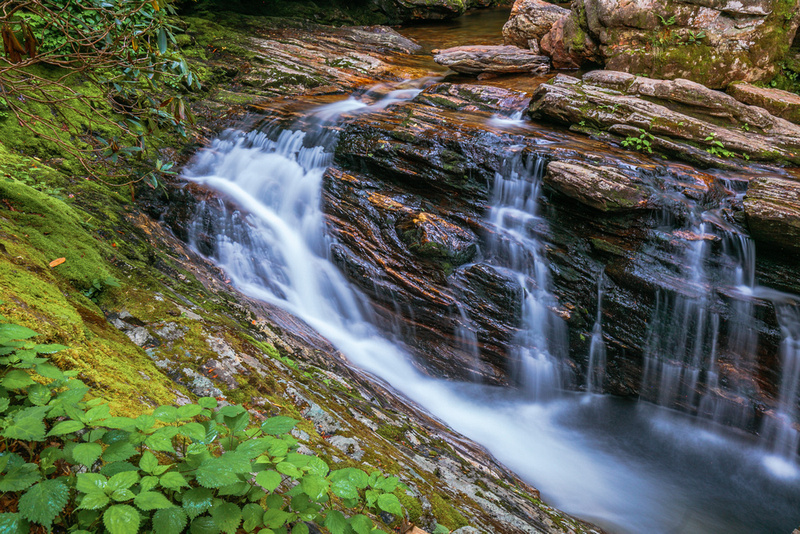 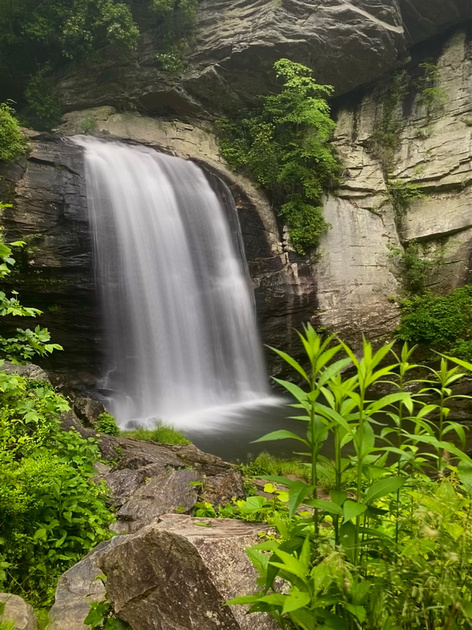 After my wife went back home, I went on a backpacking trip to the Shining Rock Wilderness, where the highlight is the this quartz rock outcrop known as "Shining Rock" that overlooks the Blue Ridge Mountains.