My favorite summer pictures from Colorado

I spent a large part of this past summer in Colorado.  The southwest part of the state is one of my favorite areas to visit, especially the area around Telluride.  I have been coming to Telluride nearly every year for the last 20 years.  Just outside of town, less than a 1/2 mile walk from town is Cornet Falls (pictured below).  I made my way up the short, but sometimes steep, trail to Cornet Falls 3 times in July.  On the first trip, I was able to get these nice clouds along with a little bit of valley fog in the background while looking out from underneath the base of the waterfall.  Seeing all the open sky to the south and southwest of the falls made me wonder if the Milky Way would be visible.  After midnight and before dawn, it was!   I did 2 night photography trips to Cornet Falls.  I am still working on picture of this waterfall with the Milky Way, and should be up on this blog sometime in September. 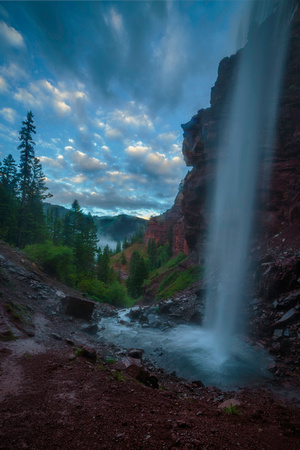 During the second weekend of July, I met up David Kingham who was hosting a photography/backpacking trip to Ice Lakes Basin near Silverton.  In my opinion, Ice Lakes is among one of the prettiest lake basins in all of Colorado.  The picture on the left below is near where we camped out for a couple of nights in the Lower Ice Lakes Basin.  However, the scenery is even better when you hike up to the upper basin.  We made it up to a smaller lake in the upper basin (below right) around sunrise. 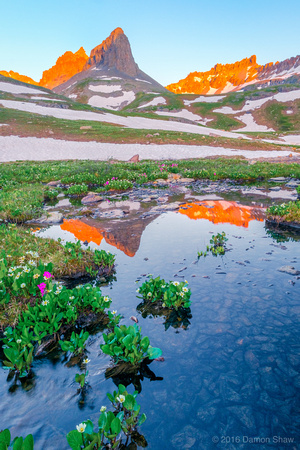 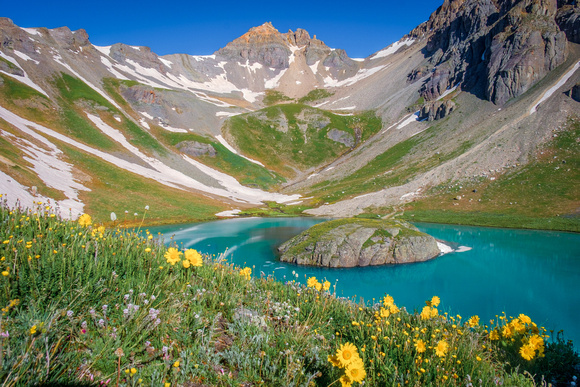 After sunrise, we climbed even higher to about 12,500 feet to Island Lake (pictured above).  As you can see, the lake is appropriately named and the water here has a unique turquoise color to it, caused by the minerals in the area.  By the middle of July, the wildflowers above treeline are beginning to hit their peak.  One of my favorite hikes in the Lizard Head Wilderness southwest of Telluride is the Cross Mountain Trail leading up to the base of the rock face called Lizard Head.  Pictured below, you can see the wonderful spread of wildflowers with the first light of the day hitting Mount Wilson.

Later in July, I made it over to the town Ouray for a photography tour lead by Jim Sternberg.  What made this tour unique is that it would include jeep rides over rugged terrain each morning.  Below is an image of columbines, as well as a mix of other wildflowers, in the Imogene Basin between Ouray and Telluride. This little area had some the most dense and varied stands of wildflowers that I have seen. 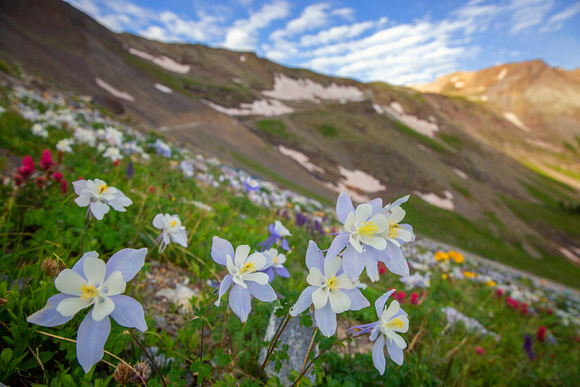 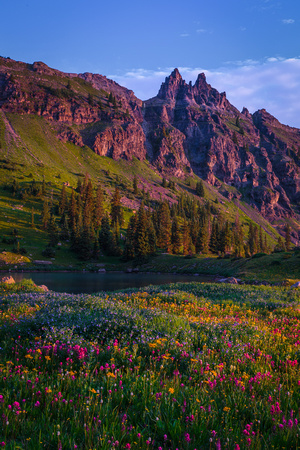 We also visited the little photographed Silver Basin (above left) and the ghost town of Animas Forks (above right).  However, my favorite morning shoot was from a hidden pond near Red Mountain (pictured below) between Ouray and Silverton.  It by far is the redest mountain that I have seen.  The red color comes from the rich iron ore in the mountain.  The still conditions made for a perfect reflections in this tarn! 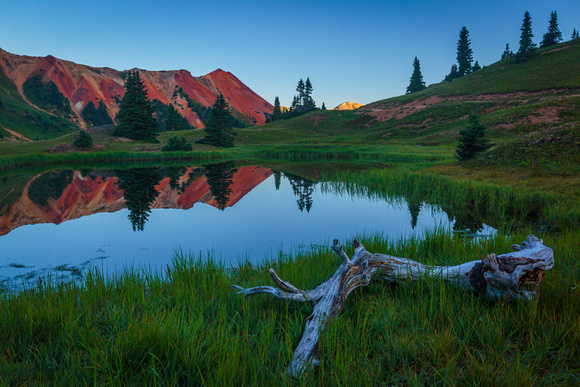 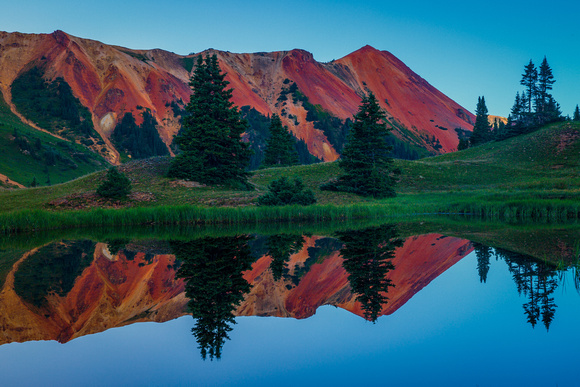 I did a lot of hiking this summer in the Colorado Rockies.  I have recently set a goal to climb a 14er in Colorado each year.   A 14er is a mountain that is at least 14,000 feet above sea level.  This year, I picked Quandary Peak near Breckenridge.   It is one of "easiest" 14ers to climb in Colorado, but still a good workout for your heart and lungs!   On the way up to the summit, I was greeted by a couple of mountain goats. 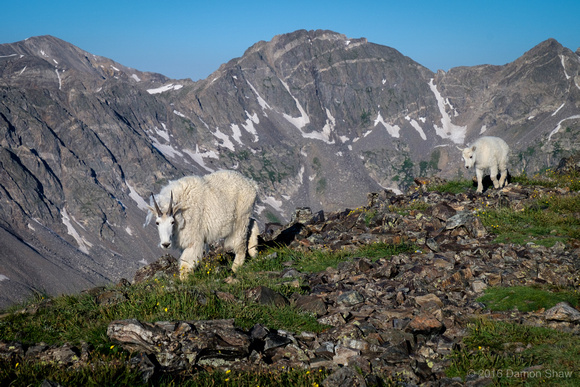