Waking Up At Midnight 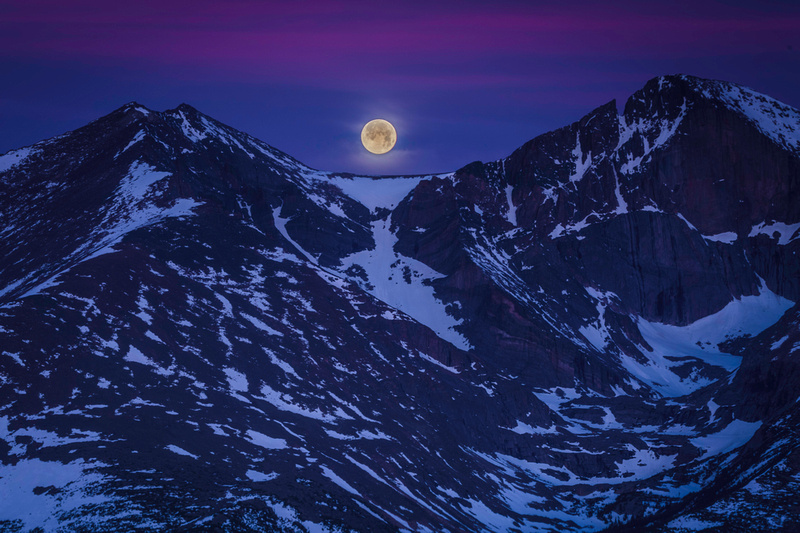 This morning, I woke up at midnight to begin my day.  In all my years, I don't think I have ever done that.  Certainly, not voluntarily!  However, I had this date circled on my calendar. I was told from Glenn Randall, a pro photographer from Colorado, that on the morning of the full moon in June that you can get a unique shot.  When at Twin Sisters Peak, he said that the moon would set between Longs Peak and Mount Meeker in Rocky Mountain National Park. This only can be photographed one morning each year, when the moon sets the furthest south all year. We might be the only 2 people have attempted this hike specifically with this shot in mind. It involved a hiking trail in the dark starting at 1am and crossing a few leftover snow patches. A headlamp was necessary. The moonlight, as well as the footprints in the snow, was also helpful for guidance. There was a short section where I struggled to get up an icy patch on a somewhat steep slope.  It proved nearly impossible to walk up it in normal hiking boots.  But with some scrambling on my hands and knees I was able to get pass that obstacle.  Once above the treeline, I was greeted with howling winds.  I would guess gusting to about 50 mph a couple of times.  It was sometimes tough to just walk straight and a reminder on how harsh the environment can be at over 11,000 feet.  Thankfully, the winds died down some as the moon was setting in the west and twilight was coming in from the east. I was also worried about the cirrus clouds obstructing the detail of the moon.  It was sometimes thick enough to make the moon a little fuzzy.  However, it thinned out enough to get more detail on the moon.  The thin cirrus clouds also added a little color to the sky as the first light from the sun was hitting the upper layers of the atmosphere.  It was a challenging hike and photo shoot.  However, once I got the shot that I was looking for and I was able to get up and down safely off the mountain, it was totally worth the extra effort of getting up at midnight!