Last week was a very rainy week in the state of the Arkansas...some of the best rains we have seen in months. So I decided to head out and photograph a couple of waterfalls in the Ozark National Forest. One of the more iconic waterfalls in Arkansas is Glory Hole. Back when I was a teenager in the 90s, I had visited Glory Hole for the first time on a family hike. I felt that it was long overdue to return there and get some pictures of this most unique waterfall where a hole has been drilled into the sandstone. Back in 1993, Glory Hole was a relatively little known place and the trail leading to it was somewhat narrow and lightly used.  These days, the trail is wider as it is visited many days of the year. Unfortunately, it is starting to show some scars of overvisitation...such as litter, carved up beech trees and even some graffiti on the rock overhang. Nevertheless, it is still a beautiful place to admire and I had it all to myself on that foggy morning.

I also visited a lesser known waterfall that is nearby in the Upper Buffalo Wilderness. There is a primitive trail leading to it, but thankfully the area is still pristine. Hopefully, it will still stay that way. As more and more people head to the backcountry, this is becoming more of a challenge. Please remember when you visit these places, leave no trace. 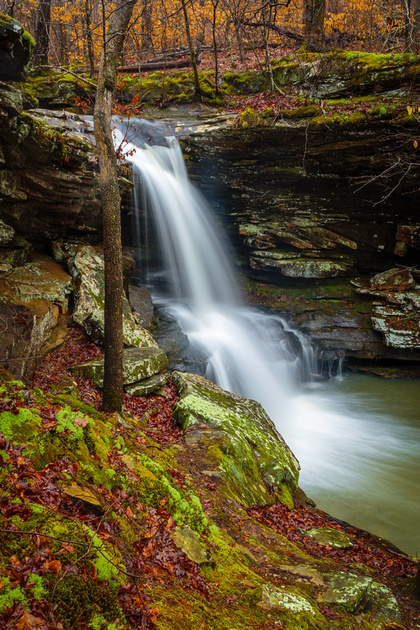 The following day, the rain ended and soon the skies cleared the following night. This allowed for fog to form in the valley of the Buffalo River below.

So now waterfall season has begun and soon the forest will begin to leaf out and add more color. I will have more waterfall pictures coming up this spring.

buy master thesis(non-registered)
Several websites attempted to make the most money while giving a low-quality service. Although it is obvious that these online businesses are difficult to track, they are free to conduct as they choose.
ukbestessays review(non-registered)
The best online photo printing affiliation that I have seen as important is the online assistance called Snapfish.com. Here you can join free, modify, move your photos to a free online mix and get trustworthy film quality prints in different sizes offered right to your home.
No comments posted.
Loading...
Subscribe
RSS
Recent Posts
The varied landscapes of Colorado An architectural journey from Santa Fe to Taos The Garden Island of Kauai Merry Christmas and Happy New Year! More from the Colorado Rockies The Flat Tops Wilderness of Colorado The Blue Ridge Mountains of North Carolina Arctic Air Invades Arkansas Snow On Top Of The Ozarks Waterfalls and Rainforests of the Pacific Northwest
Keywords
Ozarks Arkansas landscapes snow Creek Ozark National Forest Arkansas photography colorado Arkansas waterfalls winter
Archive
January February March April May June July August September October November December
© Damon Shaw
Powered by ZENFOLIO User Agreement
Cancel
Continue