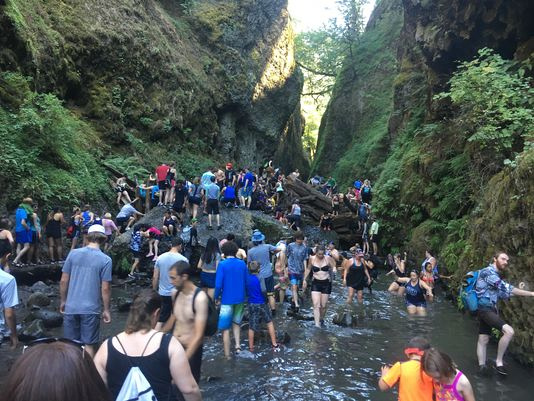 Photographer Art Wolfe once said you can celebrate something to death. In today's internet and social media age it seems that we are quickly reaching that point at some locations. The battle between conservationism and tourism is certainly not a new issue and social media is not the only thing to blame. But is social media (namely Facebook and especially Instagram) creating a culture that sends hoards of people to trample over the same spots over and over?

Industry and development has always threatened our natural spaces, but in recent years it has been the average person who is contributing to the decline in some of these places. We now have a chain of events that begins with people looking for reactions to a nice photo, followed by requests for the location, followed by a travel account sharing the photo. A multiplier effect begins where people are adding it to their list of places to see and a herd mentality soon develops where the masses follow the likes. People will always see an image of an amazing place and think "I need to go there" or "I want to shoot that" (we're all guilty of having these impulses to some extent).

The result has been an exponential increase in visitors this decade to our natural wonders. The well known Maroon Bells in Colorado had a 39% increase in visitors between 2015-2017.  Lesser known Hanging Lake in Colorado had an 81% increase in visitors between 2014-2016. These lesser known locations are now suffering under the weight of sudden online fame and are not prepared for the influx of tourists in huge volumes. The picture at the top of the page is an extreme example from Oregon's Oneonta Gorge, a fragile location that has suffered sudden over-visitation this decade. This recent rise seems to be stemming from a combination of increased population growth, more people getting outside and the effects of social media sharing sites.

This issue is a double edged sword. Publishing pictures of our beauty can have positive benefits. On one end, encouraging more people to get out in nature and raising awareness of the beauty that surrounds us can be a good thing. By reaching thousands of people in an instant, social media is putting the Earth’s natural wonders right in front of them. In theory, it could inspire new people to lead further environmental movements. On the other side, perhaps a once-special place is now in danger of being destroyed because the location can’t handle the number of visitors and can be literally trampled to its end. Early pioneers of environmental causes such as Theodore Roosevelt, John Muir and Ansel Adams inspired the public to set aside land to be protected. As our growing population continues to be more mobile and with more people enjoying the backcountry, the next challenge will be not only be to protect our lands from development, but also to protect it from the masses. It used to be that in order to find some of our hidden wonders, you had to pick up a book or hear about it from old-fashinoned word of mouth. In the digital age, information spreads at a faster rate and sent to a wider audience. Spoon feeding specific information to the masses opens up these places to a different audience who may not as respectful. With this comes a new group of people who are introduced to the outdoors through social media who may be unaware of nature's delicacies. These individuals may treat it as a theme park and have a lack of respect for the environment around them. Photos on social media rarely come with Leave No Trace guidelines. Very few of us are talking about Leave No Trace principles or making an effort to educate newcomers about responsible backcountry travel and the message of conservation and environmentalism is often missing in Instagram's look at me and follow me culture. The result can be the backcountry becoming increasingly trashed by people who know how to "like" a place, but not know how to love it.

Over the last 20 years, I've seen some hiking trails have an increase in litter, graffiti, dog feces and illegal campfire ring scars in places that were once pristine.  I have also noticed in recent years that paths are appearing that weren't there even earlier this decade. Some of these tracks that were once faint and narrow are becoming mudslides or mud pits as a result of all the foot traffic. Back in the 90s, even on a sunny weekend, you would usually only see about 5 or fewer people on a remote wilderness hike to Arkansas' Hawksbill Crag. Now you commonly see over 50 people during that hike on a similar weekend. The result of the heavy foot traffic has striped away the vegetation leading to Hawksbill Crag (seen below). 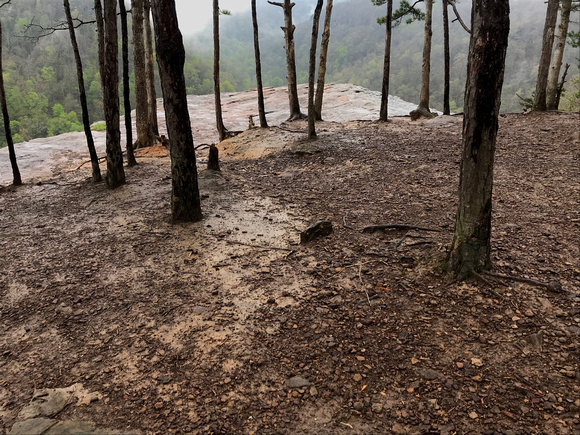 Waterfalls and other fragile areas are increasingly being trampled by Instagrammers seeking to claim their own version of shots they've admired online. Most don't even realize the future consequences of their actions. It can be hard for some to understand how just one person doing these things can be such a big deal. The problem is this: one person's post influences the masses. Some of the impacts can be more than cosmetic. Many of us also come to the backcountry to seek solitude and this can be harder to find in the digital age as more people come in.

There has been a debate between sharing and keeping things a secret. In the past few years, I began to re-examine this issue. I’m comfortable with revealing well known locations that are landmarks which are easily found on the internet.  Even with this, I sometimes question if I am sending even more "Instatraffic" to these more well-known locations. In some cases, I am hesitant to give any kind of attention to the lesser known places or the most fragile environments. When I do post, I often choose just keep it generic like "X National Park", "Y National Forest" or "Z Wilderness", but don't give specifics on exactly where the picture was taken. In these cases, I don't think it is a good idea to publish the location to prevent hordes of people from showing up. Those who geotag exact names or handing out GPS coordinates of lesser known locations or in fragile environments, especially on the internet, can make it worse.

It is human nature for us to want to share some of our favorite images with other people and get compliments. We want to share our love of the outdoors with others but we also don't want to see these great places we love to become crowded and their beauty tarnished. That is the terrible irony to being a landscape photographer. One side of me wants to restrict the knowledge of beautiful places because of potential impacts, but the other side acknowledges the best way to protect wild places is through increasing awareness of these areas. Each of us as photographers must balance to want to share our love of the natural world while doing our part not to be part of the problem. As a personal choice to minimize my impact, I don't give exact directions to little known locations, except to people I know and can trust that they will respect the place. It’s easier than ever for word to get out to a bad apple and that bad apple then ruins it for everyone. It is one thing for respectful individuals who I know and trust to know but it is another when it is delivered for "the masses" and I have no idea how each will behave. For all I know, they might be the type that throws out their trash and shoot off fireworks into a dry forest.

It can be a downward spiral when a place gets popular and it will never improve because it was at its peak beauty before humans got involved. There is not an easy answer to this growing dilemma. In my opinion, it starts with every individual and education. Without education, the problems I've addressed will grow. The best thing we can do is to communicate to others how to act responsibly in the outdoors and educate the public so that new visitors learn there are rules for behavior in outdoor spaces. While it is debatable to say social media and is ruining our natural wonders, it is becoming increasingly apparent that this exposure is coming with a price and adverse effects are occurring. I ask for photographers and the public in general to reflect on their own impact and be more mindful of what photos they post and share. Telling everybody about these places practically guarantees their destruction, but we can at least try to slow the process down. Let’s try not to put fragile environments even more at risk. If we really must see these places, it is our obligation to leave no trace and EVERYBODY must treat nature with respect. I still want these places to be just as beautiful when I return in 20 years.